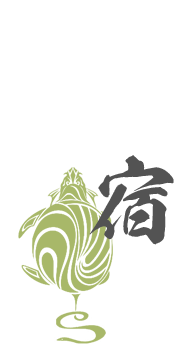 It is said that those born on Saturday evening will become a leader of Zensou.

People born in the sign of Jyo-Shuku pay careful attention to every nook and cranny. When they are planning something, they will not leave anything uninvestigated and every minute detail must be paid attention to; they are very precise. To use an old expression, they are a person of mighty faith.
There is a bottomless power and sophisticated spirituality within them.

Rather than daring, they are a prudent hard worker and have two feet firmly planted on the ground. They will steadily work on improving themselves, and some will one day see the fruits of their labors in the a large victory.
There is a part of them that has too strong of a conviction and they are prideful and stubborn as well.
They are hard on themselves as well as other people, they are slightly sadistic, but if they take it to far then some may be shunned by others.

They do not speak needlessly, use flowery language or speak in platitudes but they’ve been known to speak at length about their beliefs. They are hard workers that can’t sit still, have physical strength, and are workmen.

They are well informed about the other side of things, and so they are a star that does not like lip service.
On the inside they are honest, and sometimes this honesty even causes them to be at a disadvantage sometimes.
Normally, they are silent but, at the same time, there are times where they expend so much energy that it looks like they have been possessed.

They feel that you should display power within the constrains of authority and order; they could essentially be called the star of bureaucracy.

They love scholarship and prefer a systematic method to things.

From the exterior, they seem to give of an aura of authority that doesn’t let others come close but, on the inside, they are unexpectedly prone to feeling lost and have a breakable aspect to them. If you are totally lacking in self-confidence or skills, it is more security to not have too much ambition.
Jyo-Shuku is essentially a star sign of females, rather it would ensure a steady lifetime if one took a role as an assistant. Even if they were to succeed in expending a great amount of energy to get off the ground, and start working independently, it would most likely end quickly and be a very short-lived moment.
The cause of this failure would lie in the extreme level of pride and self-centeredness. To make a long story short: it is egoism.

This very much needs a foundation of education, opinion, and intelligence and it is also crucial for them to participate in professional education as well. The feminine traits that this sign inherits from the female star; it will negatively effort those under it. For men, there are people who have the tendency to be the keeper of their woman. Women are prideful and even though they are strong willed, they are many who tend keep a pattern of jumping from man to man.

Also, even though they are clever, some chase after the same dream for their entire life, and others may switch jobs and careers constantly.
They have good luck with money but they are the type that is also tight with it. They count what comes in and constrict what goes out.

For women, they fact that they can be hard to please also comes into play. They have a peculiar power that, regardless of their age, gives them an uncommonly subdued aura that mesmerizes a large number of people.
Nevertheless, if they are prone to dedicating themselves to work then their fortune will not improve.

Also, Jyo-Shuku are inclined to view life as a battle and if they deem someone to be on their side, then they will look after them but once they are labeled as an enemy, they have an aspect of their personality that will let cause them to carry out a purge without exception.

Special caution should be taken during love affairs, as there are times when they could lose everything. This is because once a Jyo-Shuku makes a change of direction in the wrong way, they tend to get stuck living a stormy life full of drama. It would be better if they restrained themselves from showing their emotions straight out. They should be cautious while using alcohol and with relationships with the opposite sex.

In the aspect of love, they have a tendency to make rules. They have a lot of pride and if they put priority on their feelings and emotions first by the time they realize what they’ve done, their partner has already been pushed away. They can do many careless things; they should be careful, because if they do not clearly differentiate the relationship between friends and their sweetheart, he or she might misunderstand. Clumsy expressions of love will only cause their luck in love to continue to fade further.
However, if they truly love their companion, regardless of any obstacles, they will continue to deeply love them and unless something major happens, they will continue to do so.
As a result of Jyo-Shuku’s pride, they tend to lose out on rare and valuable opportunities. This can be said regardless of gender but being able to control your emotions is the most important thing to do.

Some have late marriage, or being single, in their fate but excluding cases where people have unique talents; in general, their luck will only grow better if they start a family.
A trait that both men and women share is that they look uptight on the outside but are actually unexpectedly sensual.

With divine power and an persuasive ability Jyo-Shuku people have a very logical way of thinking. They are very patient and spiritual; they are not greedy and can endure many things. It is easy for them to push themselves to hard, so they should be careful of their health.

In a steady society, they should be cast away their ambition for a top seat but be content with the runner-up position; if they do this, then they will be able to live a secure life. Furthermore, those in this star are at a disadvantage when they act as lone wolves.