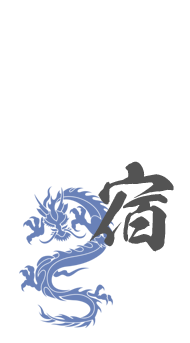 People born in Tei-Shuku are, at their core, virtuous but their star’s essence is that of a yakuza star sign. Generally, their personality is refreshingly clean-cut and straightforward. There are also many short tempered and ambitious people. Their outward appearance is willowy and soft but their true nature is tough and strong-willed.
They are well aware of the key to social interactions but they hate to lose and once they have decided to do something, they will carry it out no matter what happens.
There are also times when they will use cunning methods to get what they desire.
Fundamentally, they are pacifists at heart but once they have been betrayed, they will completely change and their heart will burn with the desire for revenge.
In addition, they should be cautious because those around them may distance themselves if their competitive personality, and habit of pretending to be tough, is put out in the open for all to see.

They bluff, have courage, have vitality, and keep pushing on with a determined power.

They enjoy high-stakes games and have good luck with winning; even if situations seem unfortunate or dire, they will most likely be able to turn it around with their natural tenacity and power.
They are tenacious, and do have a bit of shamelessness that will cause them to try and make others lose but they are blessed with luck that gives them some trait that makes them hard to dislike. Their superiors also take an unexpected liking to them, too.

They enjoy conflict and are good at fighting. They are clever enough to plot and scheme.
They hate being put into one role, they prefer to act as lone wolves who love freedom, and many of them like to challenge pre-existing notions. They have good foresight, have skilled fingers that will allow them to inspire a new style.

However, in the sign of Tei-Shuku, there are people who are all theoretical talk and no action, and even though they are good a bluffing, they have no base. There are also people who try many different things but end up as a jack of all trades and master of none.
Not everyone is violent or rough; there are some whose fragile side is a strong force that creates a very soft exterior.

Those inside the Tei-Shuku sign, in this way, have two types: soft and hard. This sign can be broken down into those two sections of tough people and gentle people. However, both types hate compromising with others and are “one-man” types, who will assert themselves. Depending on the person, there are some in this sign who are like a boss and have the leadership skills required to manage people but if they let too much of their stubborn side show, then they will lose their popularity in an instant.

Women are also strong, hard workers, and have the natural urge to care for others. In this sign, the number of innocent and pure women is low but the number of hyper-emotional women is high. They place high value on their own independence and, as a result, many lose their opportunity to marry. If they do marry, they tend to dominate their husband, live separately, or are separated by death; this sign’s luck with men is not one of the best. Unless it is a man of great esteem, then he will probably not be able to keep up. However, this does not necessarily mean that their lives will be unhappy; they can live happy lives and will see success in business, especially the nightlife business.

Rather than creating a modest home, making the big decision to become independent is also a way of life.

Also, they were born with luck in money. Comparatively, this is a star that is fortunate. However, they should be careful not to become to full of themselves because they will be seen as a swindler with too strong of a personality, and will be disliked by others. Even though this star is naturally charming, there is a limit to that power and if the person loses their reason, they will be come one of the most disliked types. It is necessary to constantly be self-aware of that fact.

Additionally, there are many men and women in this sign who have the tendency to be players.

In general, Tei-Shuku people hate being tied down; on top of this, they are skilled and have talent. Rather than becoming a common office worker, they should try their hand at choosing a job that they can start independently; this will give them a chance to display their skills.